Posted by Heather Krill in Life After Paralysis on July 01, 2021

First published on the Christopher and Dana Reeve Blog…

If this last year has taught us anything, it is to appreciate the time and place and love for life. With many of us stuck at home for so long, the time to venture out again with friends is a careful reminder of the inaccessibility which remains for so many living with disabilities and their families. I’ve written about this before, and I likely will again, but this Fourth of July, this Independence for our nation, I’m very excited to celebrate our freedoms. The freedoms, of course, are allocated to us all in the Constitution, the Bill of Rights, and those less celebrated yet altogether important, the freedom to move and the freedom to have equal access to opportunities. 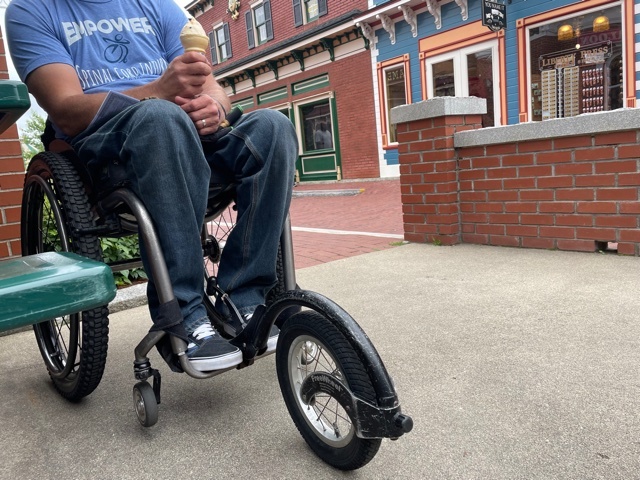 I grew up about an hour outside of Boston, just across the border in New Hampshire in a medium-sized suburb called Merrimack. We did July 4th upright! Those memories from my childhood of our midway and cotton candy and fireworks on the football field gazing up are some of my favorites. My dad used to embarrass me when he would drive his red Hyundai Excel hatchback with the windshield wipers waving despite it not raining. Instead, he stuck little American flags in the ends and pulled the wipers off the windshield, so they too appeared to be waving in their own parade everywhere he drove. It really could not have been super safe, but I don’t ever remember hearing of someone pulling him over to remove them. Anyway, friends would say, “Heather, here comes your dad; I can see him a mile away,” and I would cringe; yet, there was no diminishing that man’s pride in his flag and country‑- no matter how much the attention he drew to himself also drew attention to his kids.

So there we were a couple of days ago, wheeling down the Main Street of Clark’s Trading Post, a celebrated favorite landmark located here in the White Mountains for almost 100 years. There will come a time when our kids outgrow the train, the segway park, the Bear Show, the bumper boats, the water slide and Merlin’s Mansion, but we will ride both the real and metaphorical train— and yell, “Scram You Old Goat” at the scary Wolfman who chases the train and pretends to shoot at children– for as long as our own will let us. Only in New Hampshire, as we are the Live Free or Die state, can one get away with pretending to chase a train full of people with a weapon and have it be considered entertainment.

But in preparation for our day’s adventure, Geoff reminded the kids to grab his free wheel, an attachment that lifts his front wheels so he can avoid potholes or cracks or authentic cobblestones. The Free Wheel is an absolutely amazing adaptation, and we certainly could not live without it. We will be taking it camping with us tomorrow; in fact, it was one of the first pieces of equipment packed just to make sure it wasn’t forgotten. Items like toothbrushes or even sleeping bags could be procured elsewhere if needed, but one can’t just run into a store and purchase a Free Wheel. Geoff tells the kids about the importance of being prepared for any kind of terrain, and it continues to be a great road map for the tweens we are entering. One never knows if the road ahead will be newly paved or riddled with rocks and crevices, but one can be more independent when one is prepared with options to face whatever challenge is ahead.

Then the words come. And they do from time to time.

“It sucks, sometimes, doesn’t it, Mom, that Dad needs all this extra stuff just to have fun with us?”

And I want to agree with him that it does, yes, sometimes suck for their dad, my husband, to be in a wheelchair and need extra stuff, but I tried to answer as his dad would. “But at least he gets to be here with us today with the right gear to make the tricky parts of the road a little better.”Then I take Geoff’s hand, and we stroll down any Main Street in America, knowing the road to Independence is never an easy fight, but certainly one worth striving towards. Happy Fourth of July! Thank you to those of you in the world who help to make your places of work and play accessible for all.

Heather Ehrman Krill is a writer- wife- teacher-mom who lives in the White Mountains of NH with her husband, Geoff, a paraplegic and professional skier, and their two children, Carver and Greta, who are 11 and 10, respectively. Please check out her novel True North, website www.heatherkrill.com, author FB page Heather Krill, and @heatherkrill1 on Twitter.