Posted by Heather Krill in Life After Paralysis on July 26, 2021 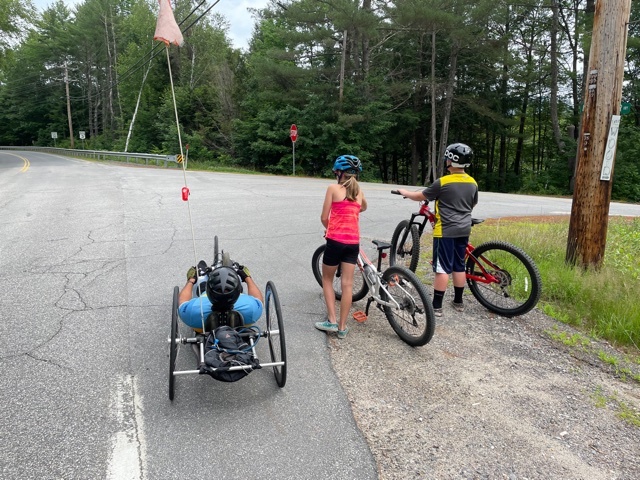 Our family eagerly awaits the start of the summer Olympics in Japan, followed by the Paralympics two weeks later. While the lack of fans and families in the arenas will make for very different games, these changes will no doubt still reflect the power of the abilities represented. Back in 1996, I was lucky enough to be a spectator with a few of my college friends at the Atlanta Olympics. I remember driving down to Atlanta the summer before our senior year at Connecticut College. There were five of us crammed in my friend Phil’s Ford Taurus, yet I don’t remember complaining. I remember the heat of Hot-Lanta. I remember an amazing seafood paella cooked by my friend Margaret and shared by our crew in her family’s backyard. I remember drinking cold beer from a frosty, glass cowboy boot. I remember the thrill of driving the four hours to Birmingham, Alabama, the soccer venue, to watch both the men and women’s match; neither team was American. But it did not matter one bit in my memory. I remember watching the skill and talent on those fields in complete awe.

Fast forward to the European soccer championships last month. We watched with Geoff’s sister and brother in law who were finally able to travel home to visit from Germany. Our kids at 11 and 10 were actually interested in watching the matches, entertained by both the soccer itself and their auntie’s enthusiasm. However, it also provided the opportunity for them to ask their dad about what he remembers about being a college goalkeeper just a few years prior to his spinal cord injury. “So, Dad, were you good? Like actually good?” Of course, he was good, I tell them both. They are amazed by the height of the goalkeepers on the television screen, and our son wonders aloud if he will be that tall. He has in the last year taken an interest in playing goalkeeper like his dad, but for a while, we were worried it was because he just didn’t want to run the field.

People often forget that Geoff is 6’2” because he is always sitting down. One of my favorite memories of my mom’s first time meeting Geoff was him telling her that he was 6’2″ and her saying, “You were?” and Geoff replying with shining eyes and dimpled smile, “I still am.” And so it’s hard to imagine him standing and playing in goal for Southern New Hampshire University, formerly New Hampshire College when he attended, or whacking tennis balls really hard at Bethel High School. So we tell our kids that they can do or be anything with hard work, practice, and a good attitude. We tell them this, and we model this, and we wonder what the years will bring for them as humans. They have their natural abilities that are very different from one another, yet we want them to recognize all the ways they can. Despite the struggles Geoff faces with mobility issues, he is quick to point out his life isn’t that different than a lot of dads, including those who can walk. He rides bikes with our kids; in fact, it is a sport our family had done together for years on the road, often bringing horror to many passersby when our kids were really little. “What are you doing with those little kids on busy roads?” some would ask, and we would point out their abilities as road cyclists.

They are really good at following their dad down the road because it’s what they had done since they were new riders, even back when we stayed in the safe confines of our condo complex or local bike paths. Just the other day, we headed out, and our 10-year-old daughter’s pedaling never seemed to slow down even up the hills. Our 11-year-old son needed a little more encouragement, so Geoff turned around at the top of a big hill to ride down and back up again with Carver, showing him that even with his arms alone, he would make it to the top and so would he. Greta and I just kept going and the boys met us home a little later, doing their own pace, building their own abilities and sense of confidence along the way.

They don’t need to be Olympians, but we all learn to stretch our abilities when we watch others stretch theirs. Don’t forget to watch the Paralympics following the Olympics, PRIMETIME for all.

Heather Ehrman Krill is a writer- wife- teacher-mom who lives in the White Mountains of NH with her husband, Geoff, a paraplegic and professional skier, and their two children, Carver and Greta, who are 11 and 10 respectively. Please check out her novel True North, website www.heatherkrill.com, author FB page Heather Krill, and @heatherkrill1 on Twitter.