Posted by Heather Krill in Life After Paralysis on August 25, 2020

This year we celebrate 30 years of progress in access and inclusion and the anniversary of the Americans with Disabilities Act passing into law. However, as important as this legislation was at the time of its inception, I had no idea. I had no idea about a lot of things back then. Little did I know how much this law would come into my life in just a few years. Thirty years ago, I was coming into my sophomore year of high school at almost 16 years old, excited about playing soccer, obtaining my driving license, and watching Grease, Footloose, Sixteen Candles, Breakfast Club, and Dirty Dancing on repeat with my girlfriends. Thirty years ago, Geoff was approaching the milestone of 20, enjoying his college experience, and training to be a goalkeeper for New Hampshire College, now known as Southern NH University.

A few years into ADA, I watched as Connecticut College redesigned the bottom floor of Smith Dormitory as a friend had sustained a spinal cord injury, and our housing was lovely but completely inaccessible if one needed a wheelchair. This allowed her to live with us, her friends, our senior year of college. This allowed her– even more importantly– this allowed us to be truly together in our last year of undergrad, to eat our meals together, to stay up late together, and to laugh long into the night. Thank you, ADA. Even though you were young in those days with all sorts of adversity to sort through, you were a law that people were required to follow. I learned so much that year as an able-bodied friend in a support role about the day to day challenges even within an accessible world. 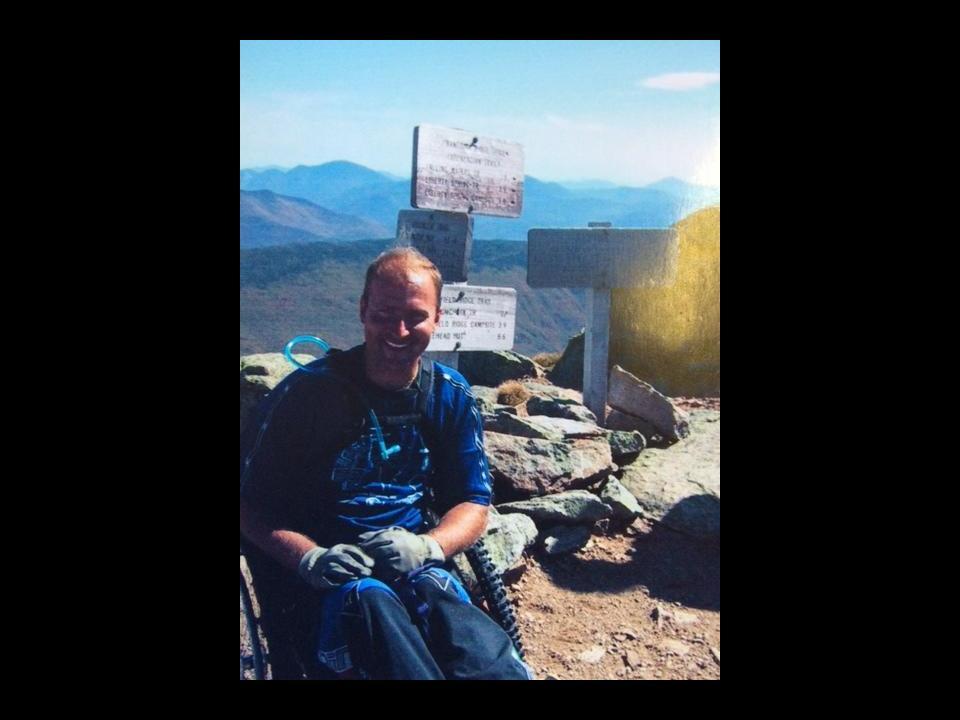 My Uncle Gordon also had been paralyzed in a motorcycle accident when I was in high school, and I thought it was particularly awesome that he attended college at the same time as me despite our 35 year age difference. He participated in this excellent program through the University of Maine, which allowed him to attend college classes and maintain his love for woodworking. He passed away several years ago now, and his ashes sit upon the accessible standing bar, which he built and bequeathed to Geoff and me. Who would have thought all those years ago that an accessible bar would be used by his niece’s husband who had a similar level injury. On special occasions, Geoff can “tend” the bar while standing up in our garage. Thanks to this program through the University of Maine and ADA compliance, my Uncle Gordon took some academic risks he otherwise never would have attempted.

A few years later, into ADA, Geoff ascended Galehead Hut in a hiking wheelchair assisted by a variety of volunteers through North-East Passage along with a few others with varying disabilities. The Appalachian Mountain Club (AMC) was faced with having to make improvements to their hut system and thereby also needing to become ADA compliant. The New York Times covered this story as well as The Boston Globe not because it sounded crazy to make these huts and bathrooms hundreds of feet up mountains accessible, but because there would be people like my husband who would actually make an effort to use them once made accessible. To be clear, the trail was still steep and filled with rocks, roots, and challenges, but the hut and bathrooms were ramped, wide, and welcoming—universal design and Momma Nature all under one magical starry night.

I didn’t know Geoff then, nor did I know him when he and another wheelchair athlete pushed up Mt. Washington just because there was a paved road. The ADA is empowering– it helps to level the playing field, but as in all fields of social justice, the ADA is still coming of age. Thirty is the new 20 after all, and there is more work to be done. Channel your inner Ruth Bader Ginsburg, one of my heroes and Supreme Court Justices, “Fight for the things that you care about, but do it in a way that will lead others to join you.”When a local business doesn’t have a ramp, ask the owner why. They may have a reason, but having to explain that reason to you, your husband, and two small children cause them to pause in their response. When a local person says something ignorant about people with disabilities, remember your role as a bystander is far more powerful than you think. Use your words. Thank you, ADA. Thank you to all who fought for that legislation, and those who model every day how accessibility, inclusion, and innovation continue to make our world better.