Posted by Heather Krill in Life After Paralysis on December 03, 2021

First published on the Christopher and Dana Reeve Foundation Blog

This year’s theme for International Day of Persons with Disabilities (IDPD) is “Leadership and participation of persons with disabilities toward an inclusive, accessible and sustainable post-COVID-19 world.” According to the United Nations, 15% of the world’s population live with some form of disability, which, in a population of about 7 billion people, is a little over 1 billion people living with a disability. One billion is hard to picture, but if we took a room of 7 people, at least one of those people would likely have a disability. We can picture 1 in 7 a little easier and thereby imagine the world we live in as more accessible than not.

So then, in a world that is more inclusive than ever, why did my 6th-grade son deal with an 8th grader at his school cracking a joke about people in wheelchairs? Why, when his teacher reprimanded the other student and later checked in on my son about the incident, did he just shrug his shoulders and say, “It’s fine.” His teacher is amazing and followed up with me to make sure my kid was, in fact, actually fine. When I brought up the incident, his only reply was that comments like that don’t bother his dad. And he is right– they don’t ordinarily, but he is also 51 years old with almost 26 years of disabled life experience under his belt and unparalleled confidence. 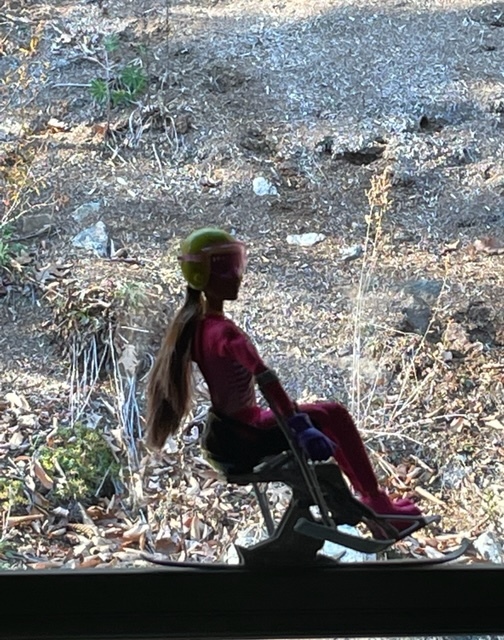 Back in October, Mattel, the toy company, partnered with Kevin Bramble, a friend of Geoff’s and a designer of monoskis, partnered to bring the world Para-Alpine Skier Barbie. As soon as Target carried them, we ordered two, but I wanted to order 100. If I was independently wealthy, I would have given one to every child in our elementary school. But instead, we gave one to Geoff for his birthday and the other to the three-year-old daughter of an old friend of mine who sustained her spinal cord injury while skiing.

My friend has some philosophical opposition to Barbie in general, as many in our generation do based on Barbie’s ideals and what that communicates to children, especially girls, etc. However, THIS is Para-Alpine Skier Barbie, and she is amazing. She can ski sitting down, for goodness sake. This toy helps make disability more mainstream and accessible for all children and not just those with spinal cord injuries, although seeing a toy designed with that in mind is equally impressive. Our kids “helped” Geoff to open the Barbie and immediately wanted to see how she could pressure her monoski to see what kind of angles she might employ on snow; ours is a family obsessed with sliding on snow. “Dad, look, she even has legit outriggers,” my daughter exclaimed. For those unfamiliar with adaptive skiing, outriggers replace ski poles for sit down skiers and provide more balance and help engage in turning.

But the best early gift of Christmas for me was placing this Para-Alpine Skier Barbie into the tiny, sticky hands (fresh from pumpkin carving with her two mothers) of a little blond, curly-haired chatterbox. She would be learning to ski this winter also for the first time, and I was able to share that this was how her mama skis too. “Mama skis too,” she repeated more as a statement than a question, and, although my friend likely wanted to murder me because she hasn’t skied in years and maybe hadn’t planned to ever again, she smiled, likely cursing me silently. But her wife agreed with this present’s awesomeness and what it might give to future generations of children, but especially to the one living under their roof whose, mom does have a spinal cord injury.

For her, it’s just a toy to play with and use her imagination. For me, the wife of a man with a spinal cord injury, and mom to our children, the ones we had thanks to the miracle of science through in vitro fertilization, Para Alpine Skier Barbie makes disability active, recreational, accessible and potentially super fun.

So, on this International Day of Persons with Disabilities, thank you to Mattel, and Kevin Bramble and Barbie for the accessibility toys like this bring, in addition to the ones yet to come. Our own daughter received a racing wheelchair Barbie for her fourth birthday because she wanted to race like her dad, despite her own two legs being quite fast. This is the inclusive and accessible world we wish for.

Heather Ehrman Krill is a writer- wife- teacher-mom who lives in the White Mountains of NH with her husband, Geoff, a paraplegic and professional skier, and their two children, Carver and Greta who are 11 and 10 respectively. Please check out her novel True North, website www.heatherkrill.com, author FB page Heather Krill, and @heatherkrill1 on Twitter.