Posted by Heather Krill in Life After Paralysis on January 14, 2021# Lifestyle

I could have written this blog about our daughter having to quarantine due to being a close contact at school; I could have equally about how much my husband Geoff and I are eagerly anticipating being able to get ahold of a COVID vaccine. No concerns here– we will be vaccinated as soon as possible. We have this vaccine, which only some of us have access to, including those in the medical profession, folks in nursing homes, first responders, and our elderly. As teachers, we are waiting patiently here in New Hampshire. Fortunately, our school saw only its first case, literally the week before winter vacation.

But instead, I’m going to share with you a conversation we had as a family of four on New Year’s Day while driving to Grandma’s house, a short 20 minutes up the road, when my son confronted us about whether Santa or the elves living in our home were real, and I panicked. Simply put, I reacted by saying, “I believe in the magic of Santa and his elves, but I thought it might be fun to tell you how you were born instead.” Geoff looked at me from the passenger seat as if to say, “Really? Are we really going to do this now?” …Talking about how they were conceived through in vitro fertilization would totally sound crazier than whether or not Santa was real. Telling the kids how their conception was a little different from most of their peers had been at the back of my mind, especially as they learned more about sex (from asking us questions, thankfully and not the internet) and where babies come from. My friend Matt likes to joke about how our kids still believe in Santa but know more about sex and reproduction than many middle schoolers. 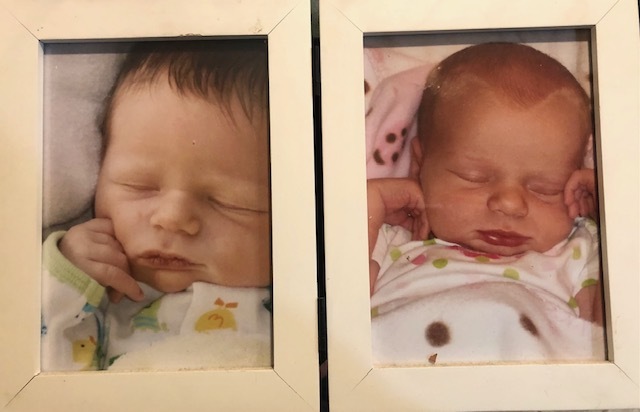 But it was also around this time of year when we began the conversation about putting our remaining embryos out there for donation adoption. Were they ever selected by another family like ours? Would those parents one day have to tell their children they had a biologically different past than the one they were raised in? If one day, due to the power of Twenty-Three and Me and Ancestry DNA and likely countless others, someone found us, I would want our children to know they had some genetic siblings possibly out there in the big, wide world. I had planned to read up on the best ways to tell the kids about complications that could make having a baby naturally more difficult for some couples. But I did not.

I started with, “Mom and Dad had a hard time making a baby,” planning to follow up with Geoff’s spinal cord injury being the reason the sperm ultimately could not reach the egg. However, Geoff interjected with a fun fact about my fallopian tube being blocked, which was true and discovered in the early stages of our pursuit to try in utero fertilization first, a fraction of the cost of IVF. One of them asked what a fallopian tube was, and I explained how it connects the ovary to the uterus, and once a month or so, one or two eggs are shot down through and hang out, waiting for a sperm to swim up and fertilize the egg creating an embryo. Silence in the backseat with suspicious glances between the two of them as seen in my rearview mirror. Carver, almost 11, asked, “So, you mean to tell me that for us, all of this took place in one of those medical dishes and then we went back inside you?”

“Yes,” I confirmed, and then Geoff really blew his mind with the fact that the egg that helped to make Carver had been frozen for about 18 months before he was actually conceived. “Buddy,” he said, “this is why I always joke about you being born from ice and why you never feel the need to wear a shirt even in the coldest of weather.”

“Wow,” he whispered in a low breath, “this all makes so much sense to me now.” So, there you have it, folks. When not, a lot makes sense in the world right now; when I could not tell my children the “truth” about Santa and his elves; when neither Geoff nor I was really prepared to have this conversation with either of our children on New Year’s Day 2021, I went ahead and gave them a lot of information about where they came from. They were way more ready for the knowledge than we could have imagined. They have friends who are adopted, friends who are being raised by family members, friends who were foster children at one time or another– why not be open about the fact that they were born from the ice after being stored in a medical freezer? Way easier to talk about than Santa, after all.