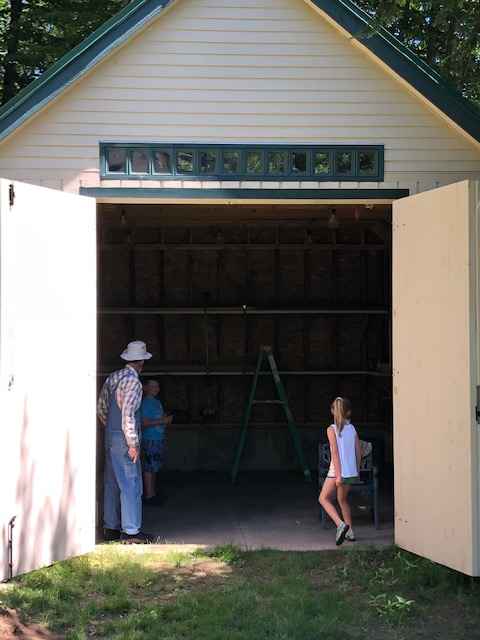 When we read our friend Danny Bourassa’s obituary today to our children, our 10 year son asked with full sincerity, “Does this mean we should keep feeding Danny’s chipmunks?”  We laughed and said no; Danny’s chipmunks were fully independent feeders now.  But a few weeks into our “Stay at Home” orders, I discovered, while raking, some daffodils I assumed Danny had planted when he and his wife Cheryl lived in the house we now live in.  Two weeks ago the daffodils bloomed, and I took a picture to send to Danny and Cheryl just to let them to know how much we love the growing gifts they left us– and that of course we were thinking of them always.  Cheryl told us a wonderful story about how Danny’s dad Roland had cultivated daffodils and always passed them out to the ladies at church on Mother’s Day.  These daffodils had come from those daffodils because they had passed them out at Roland’s funeral.  She thanked me for the picture and shared that Danny had taken a turn for the worse and, if we wanted to come visit soon, we should.  Danny had been sick, but they had just driven by the house recently when we were out in the yard working.  Danny’s voice is pretty much in my head all the time when I’m out in the yard working, now that we actually have a yard to work in.

“Do your best to keep these trees alive, ok,” he half joked, half pleaded with me when pointing out the mulch he had spread around the base of four young maples, working in the hot sun when he should have been inside resting last summer.    “I wasn’t sure about your grass cutting ability,” he smiled and what a smile, “so I’ve mulched the trees just to give you more space with the mower,” he continued.  All fall, I carefully mowed around the mulch, and warned the kids all winter when taking their ski jumps off Doom Run (on the side of our house), “Be careful not to hit Danny’s trees!  He will kill me if we kill his trees,” and our kids nodded their heads knowingly.

So, I told Geoff and the kids we needed to go tell Danny and Cheryl about all the cool greens coming up in our “shared” yard and that Danny maybe didn’t have a lot of time left.  I knew how much he loved children and had always engaged ours in whatever project he had going on over in Alpine, where he was our property manager.  I remember one time he was using the bumper of a truck and some rope to pull overgrown arborvitaes from a neighbor’s place.  “Heather, grab the kids to watch– they will love this,” and they always did.   He built them a sand box on the edge of the woods where none of the other condo owners would complain.  He knew first hand about ALL THE COMPLAINTS WE KRILLS RECEIVED while living in Alpine Village, and he also knew most of them to be a load of crap.  He hated being the bearer of whatever complaint had been lodged against us or our bicycles.  I’m certain there were many complaints that were lost along the way between the Board and our house.  He went above and beyond to repair our wheelchair ramp out front and always asked Carver and Greta what adventures they were up to or if we had caught any fish in the pond.  We watched him dig all the posts for that split rail fence hand by hand.  He knew what it meant to be our neighbor long before we moved into each other’s homes.

Back in July, their friend Jane approached us with a the concept of buying each other’s houses.  Danny and Cheryl really needed a place where they didn’t need to worry about the outside any more, a place they could “retire” to, although Danny was never really good at retiring.  I didn’t believe we were ready to move because I could barely keep up with the inside of our condo let alone an entire house with a yard.  But again, Danny must have had a premonition of the quarantine coming our way; he must have known I would never have survived 8 weeks (and still going) trapped in that condo.  So we bought their home 2.5 miles from our condo, and everywhere we look is a reminder of what Danny could build, or grow, or imagine, or envision.  He knew I too would grow to love our new place and what it afforded our family while still remaining accessible.

On our way to visit Danny and Cheryl with some of his daffodils to share, we noticed that a treehouse Danny’s dad had built for the grandchildren and lived on a recent Bourassa property had fallen out of its tree.   I looked at Geoff driving the car, and thought, “What the hell!  Danny is dying and this tree chooses this moment to fall apart? And then I knew in my heart that we were meant to take Danny’s treehouse.   We visited with Danny and Cheryl with social distancing from our old back deck in Alpine Village.  Danny was sleepy but he was able to say hello to both kids, and I’m pretty sure he heard my plan about stealing the treehouse from under the cover of darkness.  Just kidding.  I was able to email the new owners of that property, Ben and Steph Yanofsky, also the new owners of the Linwood Veterinary Clinic, who gave us the green light in salvaging whatever we could from Danny’s treehouse.

At first we were hoping just to be able to take a few boards and maybe the window, pieces to rebuild around.  But then as we took more apart and loaded more away from the structure, we realized how much was left that was really good wood– sturdy and solid and well crafted– far better than we could ever be able to build on our own, even with good friends.  Over the course of the week of our April vacation with Uncle Kenny and Uncle David’s help (our quarantine family), we were able to get almost everything over to our house.  Then our other dear friend JJ helped us to load the base onto a snowmobile trailer on Saturday.

Danny passed away Sunday morning.  There was so much that we still could and should have learned, but he gave us what he could– and oh my word– was that more than enough.  I wander around our garage wondering how did he know to do that?  Build that?  If this breaks, will someone–anyone– know how to fix it?  Did he know that his barn would one day be able to house all that equipment some of our neighbors (actually only neighbor) complained about?  He gave us his time, his stories, his bird feeders, his apple trees, his ideas, his daffodils, and so many surprises growing in our yard we can hardly imagine.  We miss you, Danny.  Cheryl and family, thank you for sharing him with us even if just for a little while.

PS.  To read Danny’s obituary here is to know him a little more. Those interested in making a donation in honor of Danny, please consider becoming an organ donor.  Danny’s extra ten years are a miracle of modern medicine as the longest surviving recipient of multiple organ transplant.  This past September he was very proud to participate in a panel discussion for medical school students regarding his 10 year anniversary.  He believed in recycling, so it’s only fitting we are repurposing his treehouse.