Recently, I took our daughter to see Annie with a group of local female mentors and the young women they mentor. This Annie was amazing, and the production at Plymouth State University included 125 actors and actresses ranging in age from 8-80 and included very professional as well as community theater participants. This version included Franklin Delano Roosevelt from his wheelchair helping to sort out the New Deal. At the end of the play, FDR even stood up in his wheelchair, and the audience chuckled and cheered, as a final miracle– beyond rescuing Annie from bad people and saving the country from the Great Depression. Our daughter looked at me quizzically. “Mom, so that actor wasn’t actually paralyzed.Is that why everyone was laughing?”As I go to explain that this actor could walk in real life and the real FDR actually had polio and not a spinal cord injury like her dad, she says, “Well, I know what role Dad could have played really well in this play.”

I’m thinking she is going to say FDR because he is really good at using a wheelchair. A professional even. However, instead, she smiles and says, “Daddy Warbucks.” 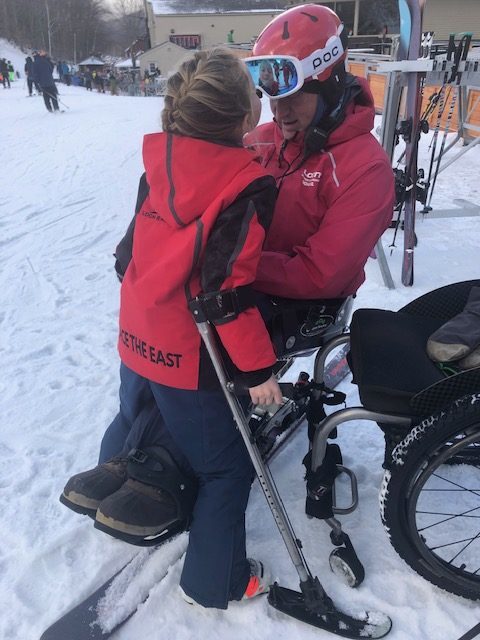 “Aww,” I’m thinking inside my head, he would love to know this about his daughter; so, I ask, “Because he is a good daddy?”

“No, Mom, because he is bald,” and she is hysterically laughing as if I missed the biggest punchline ever, and, apparently, I have. Then we circle back to why an able-bodied person played the role of FDR. Maybe he was the best person for the job. Maybe no one in a wheelchair tried out for the role. “Daddy should have tried out for this part,” she decides because he has acted before and has no trouble in front of big audiences. Geoff played the trumpet in high school in addition to soccer and tennis; Geoff played the role of Rolf in his high school musical production of The Sound of Music in addition to drum major in their marching band.

I explain how winter is Daddy’s busiest season, reminding her how we hardly see him between fall and spring. How would he have time to learn all those lines, rehearse, perform at night that whole week? “I guess,” she agrees, reluctantly. She and her brother have both always loved theater and music and school concerts, enjoying the performance aspect of growing up just like their dad. I once tried out for a part in our middle school musical and later given the role of prompter and prop person once they heard me sing. Carver is currently learning the recorder and waits patiently to start playing the trumpet (like his dad) next year in the elementary band. Clearly, no one in the family wants to play the piano like their mother did, despite having a very nice Casio keyboard gifted to us for Christmas years ago by Geoff’s parents. Then I remember teasing them about not liking me very much to give the gift of loud music without proper lessons to accompany them! Both of our dads sing well too and even performed a duet together at our wedding, a memory our children have only heard about. Carver questions every so often, “So Pop Pop and Grandpa actually sang a song together? Why don’t they make a band? Why didn’t they sing on Christmas Day instead of saying Grace?” These are both excellent recommendations which make me smile given Geoff’s dad will be 80 and mine just turned 76. Why the hell not start a band? Gram and Grandma can play tambourines and spoons. Right?

Kids remind us how anything is possible. They also remind us of their honesty. “Mom, did you know I have the oldest parents in the whole third grade? Mom, did you know so and so’s mom is only 28? Mom, do you know Dad is easier to hug because we are the same height? When I hug you, I’m really hugging your belly, but with Dad, I get his chest and his shoulders and, well, that’s just better. ”Yup, it really is. I get it. I don’t have the heart to tell them how much fun I had in my twenties and early thirties NOT being responsible for keeping another human alive; nor do I have the heart to make them aware that one day their 10 and 8 year old bodies will be taller than mine. Life is short. Go big. Play music. Hug each other.

Heather Ehrman Krill is a writer- wife- teacher-mom who lives in the White Mountains of NH with her husband, Geoff, a paraplegic and professional skier, and their two children, Carver and Greta who are 10 and 8. Please check out her novel True North, website www.heatherkrill.com, author FB page Heather Krill, and @heatherkrill1 on Twitter.