February has some truly spectacular skiing in New Hampshire most years as enough snow has fallen, and the sun comes out for longer days and warmer temps than it does in January. This year, particularly, needed February to arrive. Maybe the “year” didn’t, but I sure did. January was harder than usual, but now that February has arrived, we see spring around the corner even if the groundhog predicted whatever he predicted. I don’t put a lot of stock in Punxsutawney Phil or the Farmers’ Almanac for that matter. Winter in NH means a tremendous amount of snow and cold and we choose to live here as the good far outweighs the bad.

But today was one of those epic winter bluebird ski days; the sun shone brightly warm on my face, and I felt the Vitamin D shooting into my pores. Riding up the chairlift with our 7-year-old daughter, I said, “Oh, hey look, there’s Daddy teaching someone on the magic carpet. We should yell ‘hi’ to him.”

“Mom, Dad is deaf when he is in his monoski.”

I busted out laughing because I’m not sure she’s ever been more accurate. It’s true. He thinks about skiing a lot during the winter months as it’s his professional obligation. However, when sitting in his monoski, it’s impossible to distract him with any other 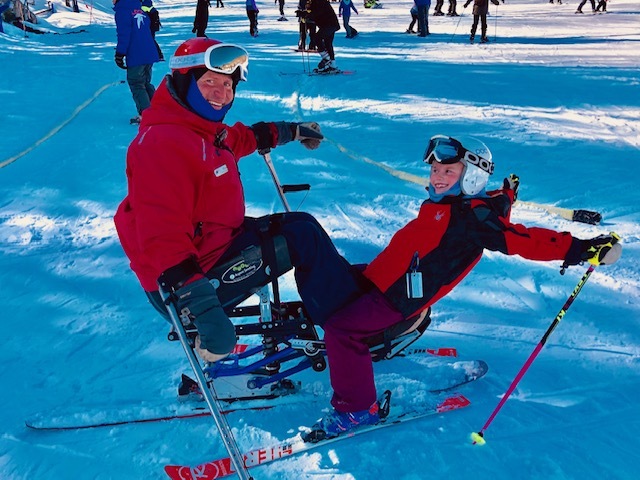 topic. We made our run together and skied over to Geoff who was helping some new stand up skiers learn to turn while following these cool sand-filled snow gun hoses. Greta skied right onto his feet which are held up by his monoski footrest. See photo.

When our kids were toddlers learning to ski on this very same magic carpet, Geoff used to push around on the snow with them sitting on his feet as if this were the greatest ride ever. And it was. But I always kind of figured by age 7 and 9, the novelty of sitting on Daddy’s feet might have worn off. Clearly, it hasn’t. Sitting there, on his feet, facing him, blue eyes reflecting in the sun, she is his mini-me. She also recognizes that she can command his undivided attention from this vantage point. “Dad, did you see the lady fall off the chair lift? How do you fall off the chairlift before you even really get on it? Dad, ski patrol had to come. Dad, dad, dad,” and despite there being adult students around him waiting patiently for him to turn their attention back to them, they too are caught up in the cuteness of this one-sided conversation.

Here’s the thing though that I’m modeling for my daughter as a caregiver to my husband who has a spinal cord injury. She, at 7, is already far more helpful than her brother, when it comes to assisting her dad with different things. For example, recently, I had a meeting which would keep me busy during dinnertime, so I pulled several things out that Geoff could easily heat up in the microwave without having to rifle around the refrigerator for. During my meeting, I received a text message from Geoff’s phone which read, “Mom, it’s me, Greta. Don’t worry I’ve fed the boys. Did you feed the dog?” I did not expect her to “feed the boys” referring to her dad and older brother!

Is that because she sees me “doing all the work” and has absorbed the expectation through osmosis? I certainly hope not. Nor, do I want her to grow up thinking that this is the “usual” because although there are specific things Geoff needs help with from time to time, he also views home as his safe space to maybe be needier than he might be in public or when at his job every day, which is pretty physically exhausting, especially this late in the season.

So, Geoff and I talked about my concerns, which became his concerns too, fortunately for him! He agreed to work harder at modeling that for her and her brother– more importantly– that dads, even those in wheelchairs, can and should help with the running of the home to whatever degree he is able, including loading and unloading the dishwasher, folding laundry, clearing the table (and the toilet), cooking dinner, etc. Mom is happy to continue with lugging wood and shoveling because, well, that just makes sense. Thank you, February, for coming to the rescue!

Heather Krill is a writer- wife- teacher-mom who lives in the White Mountains of NH with her husband, Geoff, a paraplegic and professional skier, and their two children, Carver and Greta who are 9 and 7. Please check out her novel “True North”, website www.heatherkrill.com, author FB page Heather Krill, and @heatherkrill1 on Twitter.