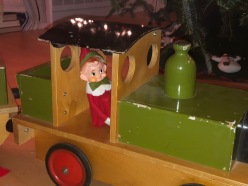 On the night before Thanksgiving, and all through the house, not a creature was stirring, not even that pesky Elf on the Shelf, which we didn’t need or want or own until last Christmas. Our children’s Grandpa gave one as a gift to our daughter, something we could not return to the Santa Store of Life or it would have been the equivalent of filling her little soul with bagfuls of coal.  Gee, thanks, Grandpa, thanks a lot! As much as he really loves me, his overworked, overstressed–just doing the best she can each day as a hardworking teacher mom –who has said repeatedly that our children don’t need an Elf on the Shelf to fully experience the magic and miracle of Christmas, he must love his granddaughter just a little bit more.  Maybe he could not handle her constantly posing like a human elf on the shelf last holiday season as seen in the above photos.  She is compelling, truly.

I’m that mom who did NOT want her kids to believe in Elves on Shelves.  Their dad did not care as much, but, given his spinal cord injury, he also would not be the one moving the Elf to crazy places to “surprise” the children each morning. For years, my kids have understood that ours was not an Elf on Shelf family, even though their best friends and cousins celebrate with elves.  For years, I explained that in our family only the holy trinity of God, Santa, and one’s parents weigh in on character values like goodness and honesty, not naughty elves.  This held true until last year when Grandpa gave her what she had wished for most.

Now, in the days leading up to Thanksgiving, our daughter has wondered aloud about her Elf’s impending arrival.  “I wonder if he will be on the ceiling fan in the morning or if I will wake up, and he will be sleeping next to me or maybe near the woodstove to keep warm.  Mom, where do you think he will appear first?  Mom, do you think he will be naughty?  Mom, I’m just so excited to see him again!  Can you believe this is our first year celebrating with our Elf?”

And the thing is– what I can’t say aloud to her in response to this question without crushing her hopes and dreams– is that I really can’t, actually, believe it.  I can’t believe this is our first year celebrating the holiday season with our Elf.  It is just elfing unbelievable.   Yet, here we are on the eve of Thanksgiving.   Instead, I smile and hug her close.

The reality is that I’ve already decided to embrace the Elf because in this world where childhood is short and stress is high, what does it matter?   When my eyes well up each night watching the news of traveling children, whose eyes are tired and cheeks are dirty and bellies probably hungry, because they, like their parents, are searching for a better life, maybe wishing on this Elf on the Shelf might bring a little magic to them too.  When I see the devastation of those fires out west, maybe wishing on this Elf will bring rain and relief and hope to those families who remain, despite the loss of life and stability and countless homes before Christmas.  I know their Elves on Shelves will find them in their new homes, I tell my daughter, because they have the same kind of tracking technology that Santa does.  Look at me go now.

When I think about the Matthew Shepards of the world, those still living, along with the families left behind in the wake of fear and hatred, maybe our Elf on the Shelf  kindles enough kindness so that our children believe hate crimes and school shootings are more like Halley’s Comet than sunsets, occurring only once in our lifespan rather than daily.

Maybe.  Just maybe.  So, before tomorrow, I’ll dig him out of whatever angry hiding place I felt was appropriate last year, and we will welcome to our shelf– Snowy or Snowflake, or maybe it’s Snowshine! Between Uncle Gordon’s ashes, framed family photos, various plants, knicknacks and books, there should be space enough for an elf, endless wishes for a better world and continuing gratitude.  Even Grandpa must have known he would be forgiven.

Happy Thanksgiving from our family, including said Elf, to yours!

2 thoughts on “This is Elfing Unbelievable”