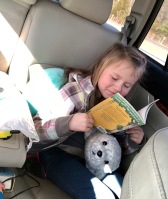 Found this one my phone after the trip…

When I told the almost 10 year old daughter of my best friend since sixth grade that we would not be using electronic devices in the car between her home in NY and Philadelphia, our road trip destination about 2.5 hours south, I felt her eye daggers pierce the back of my head.  Looking in my rear view mirror, I watched my son shrug his shoulders and shake his head knowingly that it was not a battle they could win collectively in the back seat– even if 3 kids to 2 adults.  However, this would be the first time my kids would see New York City or head down the Jersey Turnpike or drive across the Ben Franklin Bridge– and I wanted them to really see them and to talk with each other and play the license plate game, which my kids love, and  “Never Have I Ever” which we did after Macy taught it to us.  This would also turn out to be the first time they had a visual of what happened the day the Twin Towers were attacked, the first time they saw mentally ill people living in the streets, and the first time watching folks ask them for money.   Now almost a week later, when asked what the most exciting thing was that they saw in Philly, they will tell you, “When Mommy drove by that burning car on the Jersey turnpike.”  And that was exciting, no doubt, especially when Mommy wasn’t sure she should zoom by the flames or stop and wait for the imminent explosion.

Here’s the thing: as a child of the 80s primarily, we entertained ourselves with books, the roadside sights, mix tapes, and each other on road trips.  I wanted them to pay attention to what was outside the car as much as inside. Miraculously, they were fantastic versions of themselves.  The big kid sat in between my own two which eliminated the physical ability to harm one another.  Her mother, far more anxious about city driving than me, locked the car doors pretty much every time we got in the car.  This is not any different from her mother when we were growing up in suburbia 30 years ago.

I’ve always loved road trips, especially when one can’t afford to fly anywhere more exotic.  There was that time our senior year of high school when our parents let six of us, newly 18 for the most part, borrow one mom’s mini van and drive all the way to my Aunt Rosie’s house in Florida. Crazy, right?  Best week of our lives to that point.  We had budgeted the cost for our gas, used triptiks from AAA (remember those?) a cardboard box full of bread, peanut butter and jelly, and the rest was history.

Road trips only got better from there.  In college, we visited friends at other colleges like Penn State and Holy Cross and American University in Washington, DC.   We maybe had a sleeping bag, some snacks, a change of clothes, deodorant, and tooth brush– the essentials.  I know we didn’t travel with coolers or snacks or technology of any kind, behind the car radio, maybe cassette tapes and later CD’s.  Since becoming a mom, I usually take April vacation to drive to Massachusetts to see our mountain friends in their actual homes or Connecticut to see Conn College friends still in the area, but we were ready to adventure further this year, mostly because I needed spring.

Gone are days of light traveling.  Carver packs for epic month long stays away, a variety of stuffed animals, hat accessories, and 17 pairs of PJ’s “just in case I (meaning him, not me) drink too much before bed.”  He worries about peeing the bed at other people’s homes but never our own.  Greta travels light like her mother wondering only if it will be warm enough to wear dresses in Philadelphia.  It wasn’t, but we found, not one, but TWO burning cars on the Jersey Turnpike, plenty of sunshine, the Liberty Bell, tulips, the Rocky Steps, the house where the Declaration of Independence was signed, Cousin Pete and Lena’s hospitality, Uncle Frank’s authentic Italian meat sauce and pasta, Aunt Lynn’s love,  and good times with my college roommate, Jessie, and her two girls at the Philadelphia Zoo– which was exactly what I needed after the last eight months of winter.

Explaining Sept. 11 in more specific terms than “terrorist attack” left our three children with many questions.  Some we could answer and others we were grateful for side road attractions.  When walking down Market Street headed to find lunch, Greta asked thoughtfully, “Mom, why can’t you rescue them all?” referring to the multitude of folks asking for food or spare change.  Now that she can read, signs like “I’m homeless” or “I need help” or “Please help” carry heavier meaning.  I’m reminded of my Aunt Alyce who suffered from Schizophrenia and once chose to be homeless on the streets of Philadelphia, often carrying around bags of books so she could read to others like her– only most didn’t have a warm home or a loving family to return to.

One lasting observation about three hours into the drive home to mountains after we dropped Dena and Macy in NY, Greta stated, “There were many more brown people living in Philadelphia than North Woodstock.”

“Yup,” I agreed and added how one of the things Mommy has always loved about cities is the diversity of many different races and cultures.

“I wonder if Damion would like living around more brown people.  Most of his friends at school are pink like me.  Do you think Damion will ever move to a city?  I would move to the city I think.  Maybe I will go to college in the city.  Maybe Boston.  Maybe London because Auntie lives there.”