There is no doubt that we are giving this parenting gig our best effort; however, in those moments when we realize just how badly a situation could have turned out, we shake our heads in disbelief at how we could have been so stupid. See the kids in this picture, smiling, wearing protective head gear, goggles of course. Our son asked Geoff if he could try the adaptive downhiller, not his first time asking, but the first time Geoff agreed to let him try after having proven he can handle the squeeze breaks. Maybe it was the crisp air or the fact that both kids love bike riding that told us this was a good decision. 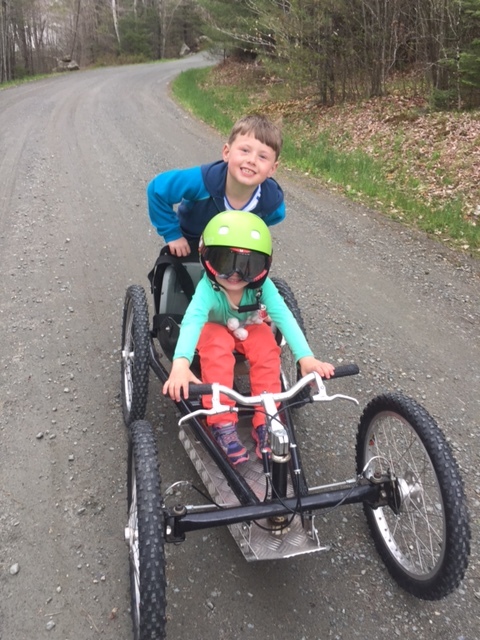 racer– loves the fast feel and wind in his hair. Then the younger one, Greta, wants a whirl. She can’t wait to feel those same things, only her little hands can’t squeeze the brakes. Hmmmm. How could we let her try it and be safe at the same time? This is the moment we should have said, “No, we’ve changed our minds. This isn’t a good idea.” But we looked into her bright eyes, filled with the same sense of adventure, and we caved. But to be “safe” I suggested a shorter, shallower slope on the opposite side of the road on the approach to the house. Maybe because she has been riding without training wheels for years and can ski black diamonds, we convinced ourselves this is actually “safe.” We are in control. We cheer her on. I set her up to enjoy the “Disney in the Mountains” gravity. I jogged slowly behind her feeling a little nervous as she looks so small in scope of the equipment. And then at the very last moment when her dad shows her where to leave the gravel roadway onto the grassy side, she impulsively banged a sharp right turn into their neighbor’s paved driveway.

This was a turn I did not expect. We were no longer in control. I wasn’t sure I could catch her as she picked up so much speed on the pavement. Geoff sat on the grass in his wheelchair relatively helpless. Greta was laughing, unaware of the pain she would feel if she hit the garage door full force, hit the parked car in the driveway, or hit any of the row of trees. My sprint caught up to her about ten feet short of the garage door, heart pounding in my chest, legs burning from not having sprinted in more than a decade perhaps. There was no part of her little body that was scared. We made a bad choice, and we were lucky no stitches or dental work or trips to the orthopedic were required. We had a plan; we were in control or we thought we were. Then our kid changed her mind, which changed everything. All we can hope for is that they weigh the consequences of risk taking behavior and choose wisely, especially if they are born with that gene that says, “I like scaring myself a little bit.”

Parenting with a disabled spouse requires patience, humor, and good friends to vent to in the aftermath. Geoff can do a lot of things without his legs, but he isn’t the one climbing high in the tree because someone has gone too far, and he isn’t the one jumping into the river when someone slips while fishing– and he also isn’t the one schlepping the skis and backpacks so our kids can ski. However, he is part of the reason our kids want to do these things or believe they should try. So, despite the fact I wasn’t born a risk taker, I have become one through marriage.