Geoff Krill isn’t exactly an ambulance chaser; however, he LOVES meeting people whose lives have been forever changed by spinal cord injury. Recently, while at a cycling event, our friend and adaptive coach MiKayla Briere watched him working with Ryan St. Lawrence, a downhill mountain biker who sustained his SCI just last summer. She smiled and commented, “Ryan has no idea he is being ‘Krill-ed’ right now. “ By definition, being “Krill-ed” means listening to someone who has not only survived a SCI but found the ability to thrive despite of it. Another part of being “Krill-ed” is introducing recreation again and believing that sport will help an individual (along with their family) access regular life. 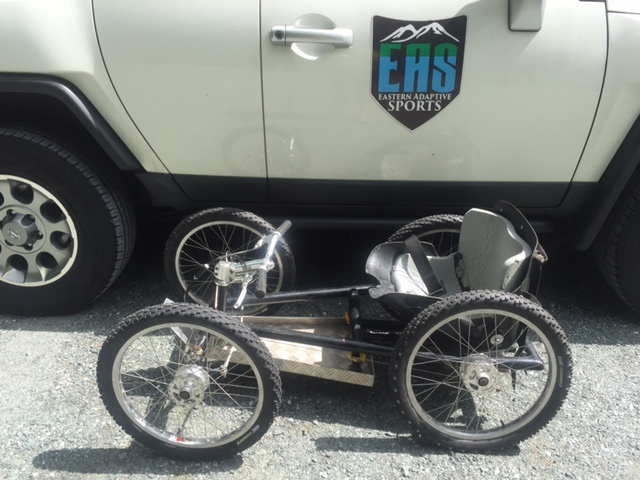 My husband runs Eastern Adaptive Sports out of Riveredge Marina on Little Squam Lake in New Hampshire. Geoff and Michelle Nestor, his operations manager, along with a group of excellent volunteers, coordinate summer programming like water skiing, cycling, and fishing for individuals with cognitive or physical challenges. However, what Geoff does best can’t exactly be packaged, nor can it be marketed or replicated easily; the service he provides is un-price-taggable. So when he learns of someone in the area with a spinal cord injury, he first wants to know when they can meet. But he doesn’t force himself on them; rather, he gently makes his presence known so that when they are ready, they know how to reach him. Sometimes, he speaks with individuals who are still in the hospital recovering from the initial spinal cord injury trauma. Other times, it is years later; however, more often than not, the contact comes within a year or two from the accident, when the individual feels physically healed and ready to find the stoke of sport again.

Geoff has been a paraplegic for 22 years, and he jokes that he is really good at it. He learned from those who came before him like Craig Bautz, a good friend who helped to teach Geoff how to mono ski the winter following his snowmobile accident. Craig taught Geoff about other aspects of learning to live again– to really live and not simply exist. He now works for Spaulding Rehabilitation Hospital Cape Cod as their therapeutic activities director, focusing as much on mental and emotional strength through meditation and drumming circles as well as physical strength. Paralyzed at 19, Craig, along with many others, has been instrumental in Geoff’s ability to encourage others simply by introducing a new activity; there is something out there for everyone even if someone did not identify as an athlete prior to injury. Sports also might include Tai Chi, yoga, and curling, in addition to more mainstream ones depending on what a person’s interest or level of injury.

Eastern Adaptive Sports, like many non-profit volunteer organizations, is fortunate to have incredible people who might not know anything at first about waterskiing or fishing or handcycling or downhill mountain biking or team hiking or rock climbing. However, they are willing to learn and make the choice to share their time with those individuals seeking recreational opportunities. These experiences are as much for the families of those with disabilities as for the individual himself: Using sport to make friends, using sport to build skills in other areas, and using sport to find normalcy again. There are those who chose to stay isolated or within the walls of their home, but that doesn’t have to be the only choice for anyone who has suffered a traumatic injury, SCI or otherwise. 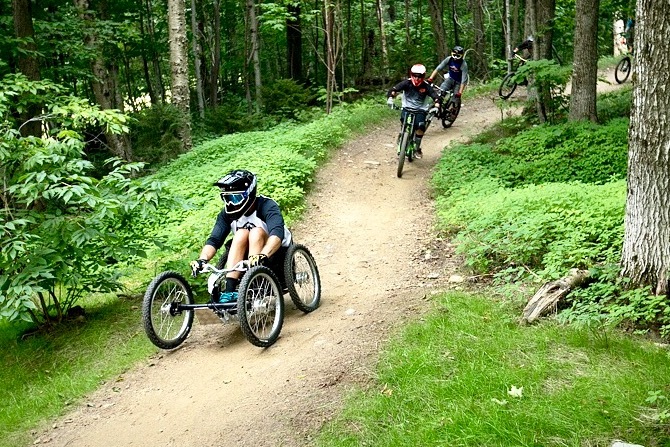 In the same way, Craig Bautz and others worked tirelessly to give Geoff his ski legs back, Geoff waited patiently for the day Ryan St. Lawrence could experience downhilling again. He doesn’t really even say too much; rather, he places a piece of equipment in front of someone and depending on the moment, they might not say anything either. Words aren’t always needed. Ryan shared pictures of the day he went mountain biking with friends with Geoff, who shared them with me so I could share them with you; and even though we can’t see his face, the stoke of the moment is palpable. I’m happy for him. I’m happy for his wife. I’m happy for Geoff who is so good at this part of his life work. One day Ryan is going to do the same for someone else because sharing knowledge and experience to help someone else overcome the tragic part of a spinal cord injury– or anything really– is the best gift we can share with humanity. If only the rest of the world worked this way.

Heather Krill is a writer- wife- teacher-mom who lives in the White Mountains of NH with her husband, Geoff, a paraplegic and professional skier, and their two children, Carver and Greta who are 7 and 6. Please check out her novel True North, website www.heatherkrill.com, and @heatherkrill1 on Twitter.