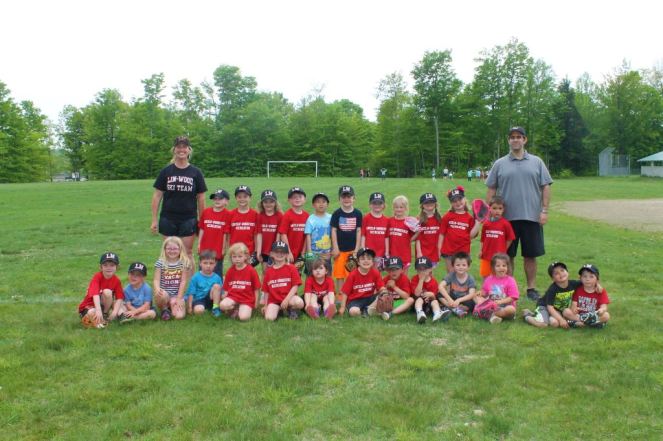 This blog about addiction and recovery has been brewing for months actually.  But most recently, I  have run into former students of mine in various spots around town who are in different steps in the process of recovery–whether it be from alcohol, prescription pain meds, or even heroin.  These were great kids in high school, charismatic and seemingly confident, some incredible athletes with the world at their feet.  Certainly there are always those kids we worry about it even at young ages with how they cope with adversity– or when some are faced with more adversity than many see in an entire lifetime.

And coaching little guys this spring, the bright and shining goofballs in the above picture, I try not to think about how old I will be when they graduate from high school.  An optimist, I believe each one will have full bellies and warm beds and supportive parents at home– and that none of them will end up addicted to anything besides laughter, love, and maybe chocolate.  I can’t imagine that one day, one or more of them may overdose from drugs or even feel compelled to show their high school English teacher a picture of a parent’s bathroom filled with opioid paraphernalia.  Yet these are the realities our children face even with our best intentions as a close knit community.

Three dads in our K-12 district have died this school year alone, one due to cancer, one to complications related to alcoholism, and one to a heroin overdose.  I do not know national stats in this regard, but I do know that one dad or one mom is one too many for any small town or big city community.  And the young man, Jesse McNamara, who overdosed has left behind a family who is working hard to have his words heard– to not brush addiction under the table of morality.  He was a good man, with a beautiful daughter, with a life ended far too soon.  His parents and sister speak of his death in the hopes that the message is heard by those who need it most.

So last week, I attended my second community forum on the addiction crisis we find ourselves in here in NH (and the rest of the nation in reality).  The first was up at Profile School in Bethlehem coordinated by friend and colleague, Sean O’Brien, who worked with me for years at Lin-Wood as our student assistance person/ aka drug and alcohol counselor.  Fortunately, the person who replaced him has been very good at making connections with kids in the same capacity.  Nick Nelsen helped to bring the same kind of open dialogue, shared experience, and film screening of The Anonymous People to the communities of Lincoln and Woodstock.

Partnering with different organizations, including NH Hope for Recovery and local police, Karen McNamara spearheaded the need for this conversation because her son, Jesse, overdosed about three months ago.  And as I listened to Karen share her story, with tears on her cheeks and my own, along with countless others in the room, I kept thinking about the kids my own will grow up with.  How the face of addiction is changing.  I think about the obituaries I have read of my own classmates growing up, probably three or four in the last year due to heroin.  I think about a former student’s death over a year ago, whom I had in ninth and tenth grade, whose laughter filled our hallways and our hearts. And so then last night, I am sitting in the same theater for Lin-Wood’s baccalaureate, a time for reflection, and I listen to local priests, ministers, and teachers, myself included, wishing our kids well, provide advice for traveling down the road of life; yet, as I stand there at the podium looking at their eager smiles, a little combo of pride and fear of what’s to come,  I’m pushing out the image of a grieving mother and father and sister who had leaned against the same stage asking the audience to be vigilant in bringing in more resources for those who need in in our community.

I think about the former students and athletes I have had, who fortunately have worked very hard to be in recovery whose stories I have heard only in part.  Kids who battled more challenges as teenagers than one thought possible, only to become an addict in their 20’s and now face the challenges of rehabilitation in a tourist town.  When I listened to one former grad, pride is the word that first comes to mind.  Working to de-stigmatize drug addiction is a difficult battle, but she showed tremendous poise, sincerity, and integrity in sharing her story.   They are reaching milestones in sobriety, and sharing, and I feel good about as well, as someone who grew up fairly familiar with the world of Alcoholics Anonymous.

We learned that the supports currently in place are not enough.  Our town needs local NA (Narcotics Anonymous) meetings and people willing to share their stories so that they might reach another person out there struggling and feeling completely alone in their process.

And we learned how to use Narcan to aid in reversing the effects of fatal overdoses.  Not only did we learn, we practiced with kits, and we took individual pouches home with us.  It’s not hard, but it could just save the life of someone else’s child, and god forbid, even our own.  While I hope I never am in that situation, I feel better knowing that I can help if ever placed in that chance opportunity of being in the wrong place at the right time.

So, as much I loved seeing former students and parents in the crowd, I loved even more the cross section of community members– young and old alike– police departments and drug and alcohol prevention programs– those not battling addiction and those who are– and the parents who clearly love them a great deal.

And then it’s back to the sweet faces in that tee ball photo, and the tee ball photos from 10, 15, 20 years ago, when those parents couldn’t imagine their children as addicts either.  Too many families struggle to find that balance between loving them and keeping them clean.  But people came to Jean’s Playhouse to listen, to watch, and maybe feel empowered to take action, oddly the very same reasons for baccalaureate.  Let’s hope for a solid combination of all three if we are going to make a difference in the lives that come next.