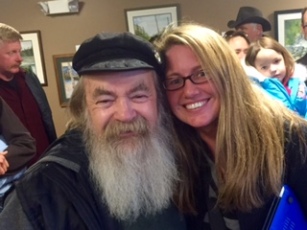 Frank Aurelio– ONE of the Original Wolfmen with me, Heather Krill.

Mackenna Mack one of the seasoned Clark’s employees! Proceeds from the Wolfman “Stuffies” went to support Jean’s Playhouse. 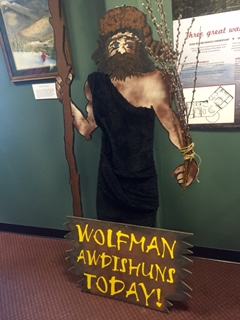 Take your picture with the wolfman!

Frank Aurelio is as classic as Clark’s itself, but quick to tell me he was not “the original wolfman.” However, to speak with him individually about his Wolfman days was easier than the collective group of aspiring wolfmen back stage.  For the first time since my Connecticut College days working for the The College Voice, our school newspaper, I rocked my faux press pass, granted by none other than Anne Clark Englert, and scooted backstage where the competing wolfmen were practicing their lines, getting comfortable in their furry vests, eye patches, coonskin caps, and chatting up real reporters.  Some were retired, looking for a fun gig to pass the time; some were young and unemployed, looking for adventure because a friend showed him the ad, and some showed up wearing suits and realized this was a different kind of acting opportunity and walked back out the front door.

For those of you unfamiliar with Clark’s Trading Post, although I’m not sure that is possible as the Wolfman audition notifications were trending on Facebook when announced a few weeks ago, this classic tourist experience is nestled in Lincoln, NH, home to Clark’s trained bears, the White Mountain Central Railroad, and, of course, the Wolfman.  To Clark’s credit, they do, on their website, suggest to parents to use their own discretion with preschool aged children and provide a thorough description of this character who terrorizes train passengers with a firearm, vehicle and fake explosions. Only in New Hampshire, friends.  Only in New Hampshire.

But with Clark’s just a mile down the road from our house and our own bear- loving, Wolfman- chasing obsessed kiddos, I felt like a blog about the Wolfman auditions was due.   What I didn’t know upon our arrival at Jean’s Playhouse was that we, the audience, would also have a vote in our favorite wolfman from the evening.  This was exciting!

Equally exciting to me was the presence of former wolfmen like the aforementioned Frank, whose quiet demeanor and awesome hug as he is also the dad of a long ago student (so fun, right- can you imagine being able to say, “Yeah, my dad is the Wolfman at Clark’s,” when asked what your dad did for work?) makes him an unlikely frightening wolfman.  Leon Noel, the actual original Wolfman was also present for the event and is a conductor now for the railroad, as was Wild Bill Farrand, better known as just Wild Bill or Wolfie; I knew he was Wolfie because he wore his name tag on the bill of his cap.  Wolfie was my favorite actually because as each of the eight fellows who showed up to audition strutted their stuff on stage, Wolfie heckled them from the audience, despite his oxygen tank.  “That used to be my turf, you good for nothing, lily-livered flatlanders” was one of the few I could get written down, yet he could go on for minutes at a time in a good natured insult.  Englert also referred back to Wolfie’s 15 year reign of slapstick comedy where he always turned it back on himself to look like the fool.   Her personal favorite insult from his years was, “You pigeon-lickin’, city- slickin’ long nose varmints.”

Another highlight of the evening leading up to the auditions was chatting with some children about the most important characteristics a wolfman should have.  Note: these are local children to the area whose parents brought them to the auditions, and they have been raised with the Wolfman in their backyard.  These children were not afraid! Fortunately, I was able to chat with them before the auditions because once they started, they gave each Wolfman a taste of what he would get from the train in “real life.”

A female wolfman or “wolf-woman” was also not entirely out of the question for most of these kids.  “A woman would be interesting for sure– they can be just as scary as men.”

But mostly, my take away from the evening was witnessing again the family atmosphere Clark’s shares with their fans and employees alike, given that many family members are employees too!    I loved chatting with Maureen, whose job was to run the video camera during auditions and, along with her brother Murray, is responsible for the bear component of this family business.  Former Wolfmen spoke fondly and proudly of their trade and time as THE skilled and scary WOLFMAN for Clark’s Trading Post.  They watched from the audience with expectation for the future of the role, the role that made them a little bit famous, at least here in New Hampshire.  Newbies were being judged on appearance, projection, presence, believability, humor, and overall impression.  Of course, the Clark family, including the actual judging panel, have final say on the man they select. Englert expects final interviews to take place in the next few days, and they hope to make the final announcement towards the end of the week. She credited great articles in both the Concord Monitor and Union Leader, appreciating the great press this early in the season.

They couldn’t believe the crowd who turned up at Jean’s Playhouse, even turning 25 people away due to lack of available seats!   Whatever happens, rest assured all you Clark’s Trading Post fans, the summer season will not disappoint.  Some man will be wearing a coonskin hat, probably a fake fur vest, and eye patch; he will be covered with hair, dirt, or tattoos or a combination of any of those three; he will carry a weapon and threaten to eat small children; he will chase the train in his wolfman buggy, feeling his “unobtainium” mines threatened, and fire said weapon into the air for dramatic effect; he will hurl insults at the people on the train, and children and adults alike will continue to scream back, “Scram you old goat” because, well, that is what happens when you ride the train at Clark’s.  Hope to see you there!  For more information about Clark’s, check out http://www.clarkstradingpost.com.