Posted by Heather Krill in Life After Paralysis on October 14, 2021

Yesterday morning, when I wrote the date on my whiteboard for my students, one Junior in my homeroom reminded me of this song, and I was surprised she was aware of Earth, Wind & Fire. She credited her dad, who is a little older than most of her same-age peer parents, and I smiled, asking if she wanted me to sing it. A professional eye-roller, she said no without saying a word. It’s a catchy tune, and the lyrics I sang to my homeroom repeatedly, until they begged me to stop, included:

“Do you remember, 21st night of September?

Love was changing the mind of pretenders

This reminded my students, which is important to do from time to time, that we are real people and not just fixtures in our classrooms; that we existed even long before we became educators, just as our parents had different lives before they became our parents, just as we did before spinal cord injuries and adulthood.

And so as our summer porch evenings are turning crisper and requiring sweaters and jackets, Geoff opened a package, sent from his high school girlfriend’s parents, in front of our fifth and sixth graders. The note was sweet, clearly from good people, apologizing for taking so long in returning his high school ring. Now, Geoff has been out of high school for more than 30 years, so we chuckled together, but our kids were incredulous. “So, Dad, let me get this straight, you gave this ring to a girl back when you were in high school, and you are just getting it back now?” 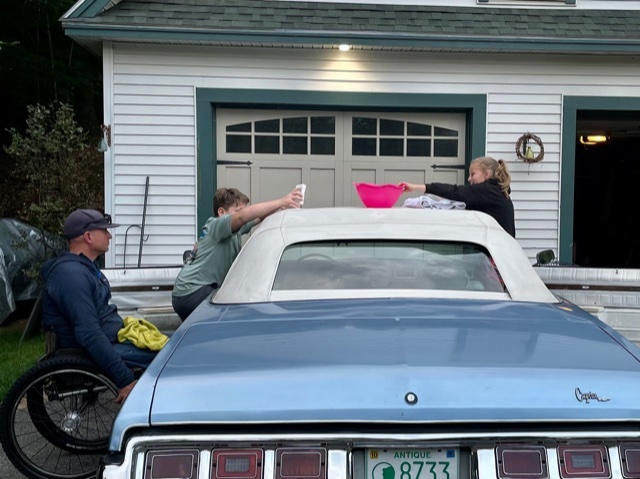 Geoff explained that it was something people did back then when you really cared about someone. Our son shook his head in disbelief, “Well, that is just crazy. I would never give a girl something that expensive.” Mind you; he is 11. Our daughter was certainly more curious about the ring itself, examined it closely, turning it over in her tiny hand. We talked about how this was the time period when Daddy was a fragrance model working at the Danbury Mall, the goalie for his soccer team, and he still drove the same convertible 1973 Chevy to school. Yes, we told them, the same one he makes them help to clean because he loves this old car so much and can’t reach the top himself. They have a hard time imagining the stand-up walking version of their dad because they only know him this way. “Dad, tell us again about when you gave her the ring,” our girl pressed him for more intel from his past, a small, blond FBI agent in search of truth from a bygone era.

Then, because we were listening to the John Denver radio station on our Google Nest, Don McClean’s “American Pie” came on, and I shared with the kids that this 1971 tune was the longest song to reach number one in America. They asked about how long it really was and if they could time it while we were talking. I shared how when we were young; we made mix tapes using cassettes because you couldn’t just find favorite songs on the internet or even listen to stations without commercials. Again, minds were blown on our front porch on a cool September night. This song was on one of my mixtapes, and I knew that the length of that song was exactly how long it would take me to drive from my high school boyfriend’s house to my own house. I have no idea of the mileage, but we were about 8 minutes apart if I was singing, “So bye, bye, Miss American Pie, drove my Chevy to the levee, but the levee was dry…”

Our kids didn’t understand cassettes, so we showed them again what they looked like and how they worked, which they understood to be a little more improved technology than their dad’s Victrola. Sort of. We ended the night with Geoff explaining to the kids that returning someone’s high school ring meant they were breaking up, so with eyes twinkling, he told the kids that it was now officially over with Christina Shephard from Bethel, Connecticut. Our son concluded, “Well, that is good, Dad, since you are married to Mom.” And so, it is.

Note: If you live in a place where winter is making her fast approach with shorter days and colder nights, remember to keep the windows down and hang out in the sunshine for as long as possible, keeping stores for the months ahead.

Heather Ehrman Krill is a writer- wife- teacher-mom who lives in the White Mountains of NH with her husband, Geoff, a paraplegic and professional skier, and their two children, Carver and Greta, who are 11 and 10, respectively. Please check out her novel True North, website www.heatherkrill.com, author FB page Heather Krill, and @heatherkrill1 on Twitter.